A Youthful "Dialogue" across Time and Space

A Youthful "Dialogue" across Time and Space

——USST Students Talking about ideals with Young Marx in German

Immersion in Trier, Germany, in the footsteps of Marx; study the German version of the Communist Manifesto, feel the philosophical rationality and poetic passion in the original text ......On November 23rd, a special German class was held at the German Cultural Exchange Center of USST, where young German Karl Marx from more than 180 years ago had a youthful "dialogue" with young Chinese students across time and space. 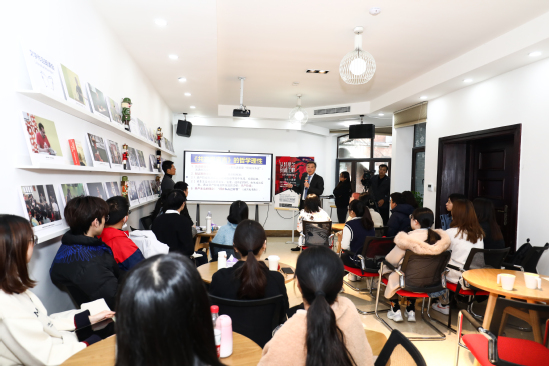 "A specter, the specter of Communism, roamed Europe. In order to carry out a holy siege on this specter, all the forces of old Europe, the Pope and the Tsar, Metternich and Kizzo, the radicals of France and the police of Germany, have united ......" With standard pronunciation and full of emotion, students SHEN Yutong and WANG Zhenyu from the German Department are reading aloud the important excerpts from the Communist Manifesto in Chinese and German. 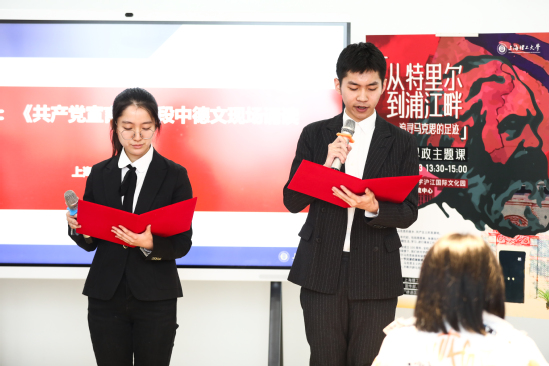 Bilingual reading of "Communist Manifesto" in Chinese and German 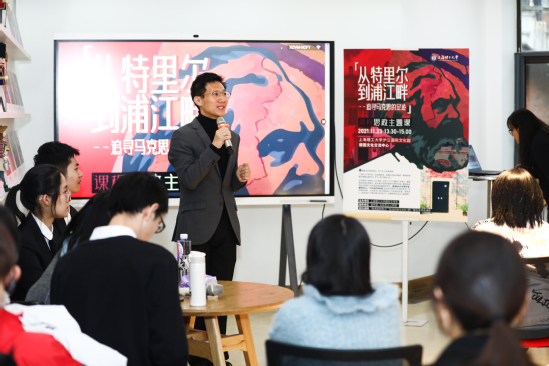 With the student presentation as the introduction, in this elaborate "In the footsteps of Marx: From Trier to the banks of the Pujiang River" curriculum ideology demonstration class, the speakers are not only experts and scholars from social organizations and the Party School of the Municipal Party Committee, but also full-time teachers and counselors on the campus. Together they brought a rich spiritual meal to the students.

"Marx was actually a poet delayed by the revolution," joked Professor WU Jianguang, Director of the Center for Teaching and Research on Marx and Engels' Original German Works at Tongji University. He led the students in a professional textual analysis of the Communist Manifesto in the context of the poetic practice of the young Marx. "Marx wrote more than 400 pages of literature as an adolescent, and the Manifesto, which sets out the grand theme of communism in extremely concise terms, is an invaluable teaching and research text for German majors." 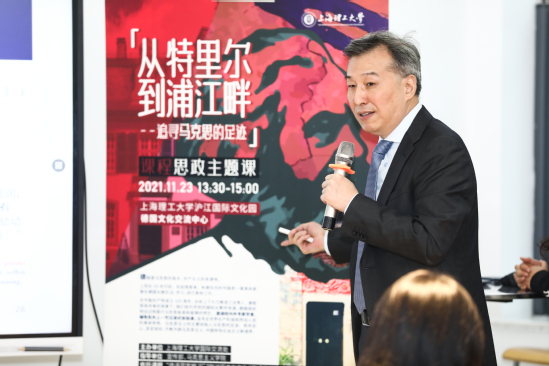 Under the guidance of experts and teachers, a wonderful connection was made between an old Germany more than 180 years ago and China today, and the students on the spot seemed to travel through time and space to immerse themselves in an emotional experience. "Marx walks with us because Marxism has profoundly changed the world and China, requiring us to treat scientific theories with a scientific attitude and approach." Said Professor HU Xuming, Vice Dean of the School of Marxism at USST. 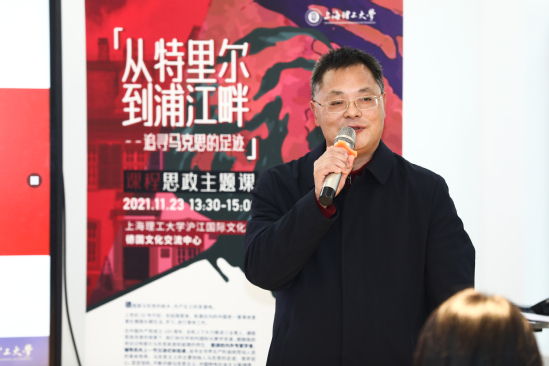 Prof. HU Xuming gave a speech on "Marx and Us - A Reflection Across Time and Space"

Trier is a small border town in the southwest of Germany and the hometown of Karl Marx, who spent his teenage years here. Relying on the international resources of USST, many students and teachers have visited Trier. Students presented their video clips in various way, bilingual in Chinese and German, about "Visiting Marx in Trier" at the Moselle River and the Simon Church Square with the bronze statue of Marx.

What influence did Trier have on Marx's development? Why did Marx, at the age of 17, establish "work for humanity" as his ideal in life? Associate Professor ZHAO Enguo, an expert from the Party School of the Shanghai Municipal Committee of the Communist Party of China, said that during Marx's growth, the impact of the French Revolution stirred the whole European society, the industrial revolution was soaring, and the public spirit of ancient Rome, the liberal rationality of the Enlightenment, the human concern and the Romantic sentiment given by Trier were deeply imprinted in Marx's heart, so that he spent his life struggling to practice the great ambition established in his youth. 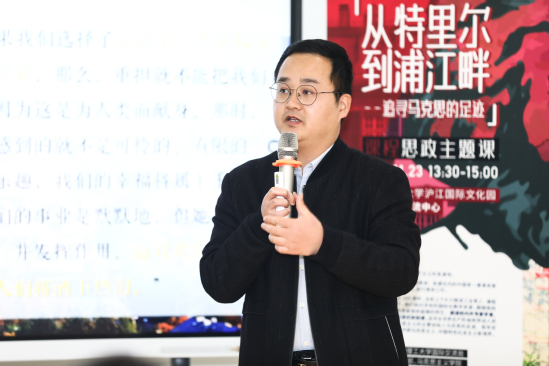 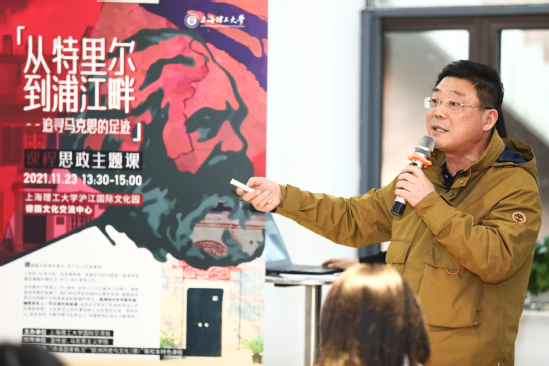 The word "Youth Ideals" became a high-frequency word in the class, which touched the students deeply. "During the first class, the teacher emphasized the importance of 'motivation' to learn the language. I have more motivation to learn and use German, so that I can tell the Chinese story to my foreign friends, including my German friends." WANG Zhenyu from the German Department exclaimed. 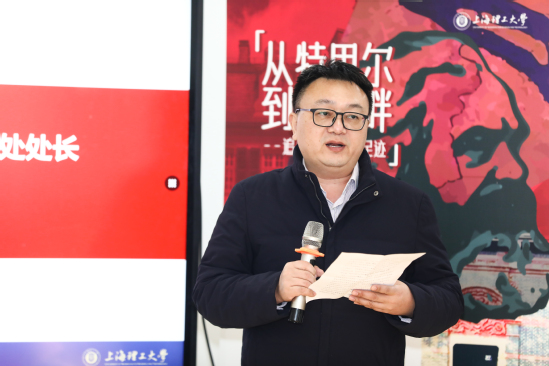 ZHANG Hua, USST Vice President, said: "Today's class is a typical case of the ‘Upgraded Version' of curriculum ideology. We focus on the integration of culture and ideas in curriculum design, and integrate more diversified ideological and political elements into specific courses. We will continue to polish, condense and improve, not only to teach a lesson well, but also to teach each lesson well." 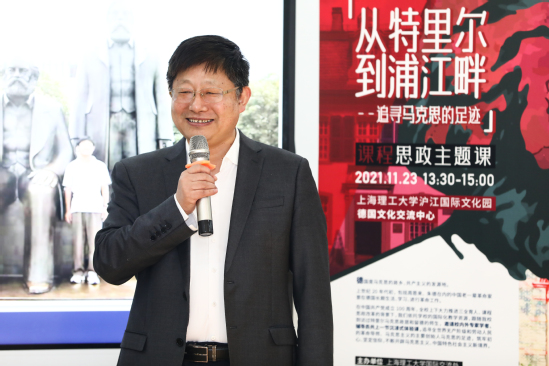 This event was organized by the International Affairs Office of USST, under the guidance of the Party Committee Publicity Department and the School of Marxism, relying on the university-based special courses such as "Profile of German-speaking Countries" and "European History and Culture (Germany)". 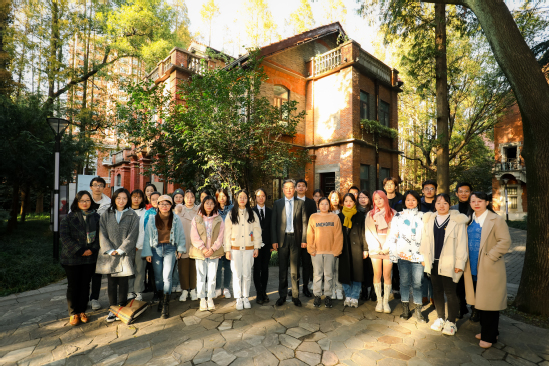 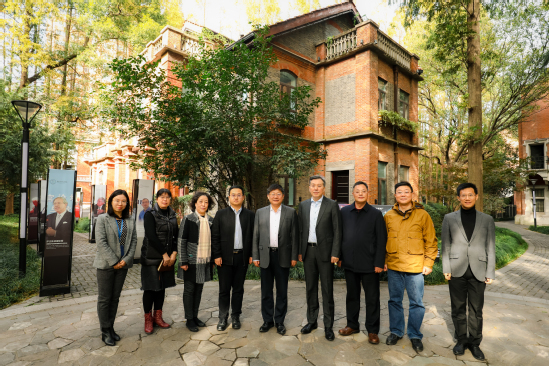