"Cooperation, Win-win Situation and Innovation: The Economic Outlook for Southeast Asia" The International Forum has been successfully concluded

On the afternoon of November 2nd, the online and offline international forum on Cooperation, Win-win and Innovation: Southeast Asia Economic Outlook -- The Direction and Path of China-Japan Cooperation in the Third-party Market under the framework of the Belt and Road Initiative, hosted by the International Affairs of Shanghai University of Science and Technology and Institute for China Neighboring Economies came to a successful conclusion.

The experts and scholars attending the meeting held a series of discussions on how China and Japan can carry out informal economic cooperation in the third-party markets with the the Belt and Road Initiative framework, in order to achieve win-win results and innovation. Shozaburo Sakai, Professor Emeritus of Chuo University, began with the status quo and topic of China's 'Belt and Road Initiative'. Thailand is often regarded as one of the main object of third-party market cooperation. Chayodom S, Professor of School of Economics of Thailand Chulalongkorn University, analyzed of the COVID-19 outbreak on the Thai services, shared the Thailand to get rid of the epidemic as soon as possible to take monetary stimulus, debt restructuring, regulatory reform and other comprehensive policy measures and its results. Huang Dong, Director of ASEAN Studies Center of Huazhong University of Science and Technology, with the theme of The New Trend of Energy Conservation and Emission Reduction- -Analysis of China-Japan Contribution Pathways, strongly advocated that China and Japan should promote cooperation and sharing through technological progress means, and support the energy conservation and emission reduction efforts in Southeast Asia to improve their results. Associate Professor Qin Lifang of Sun Yat-sen University and Professor Fan Yingjun (P A Tuan) of Deputy Director General Vietnam Institute of Economics both discussed the status and problems of Chinese investment in Vietnam in recent years, Associate Professor Qin Lifang believes that the failure of epidemic prevention and control has severely tested Vietnam's economy, but from the data of GDP, foreign trade and foreign investment in 2020-2021, Vietnam's economy is still relatively resilient, thanks to the country's improvement of investment environment, accession to several important free trade agreements, and benefits from Sino-US trade frictions. In particular, Professor Fan Yingjun pointed out that Vietnam has benefited from the deep integration of the China-Vietnam industrial chain, but the saying that Vietnam will replace China's global supply position is overstated.

Kaneyama Ken,Professor of J.F.Oberlin University, conducted an in-depth analysis of the operation of 13,000 Japanese enterprises in ASEAN. He believes that Japan's large-scale investment in Southeast Asia contributes to the economic growth of host countries. Tsuri Masao, Professor of Okayama University, shared his views on the importance of international labor exchanges in the title of Implications for International Cooperation through Analysis of the Relationship between Well-being and Labor -- Analysis from the data of age groups and Du Dao Prefecture. Xiong Bin, Director of ASEAN Studies Center of Kunming University of Science and Technology, from the perspective of social capital and localization of Chinese  Enterprises Investing in ASEAN, put forward in the third-party market investment and cooperation, Chinese enterprises should pay special attention to the government network, media network, informal payment factors, in order to overcome the foreign disadvantage, faster improve the efficiency of third-party market cooperation. Wang Jian, Professor of University of Chinese Academy of Social Sciences, reviewed the background of Japan's attitude towards the Belt and Road Initiative from initial resistance to gradual acceptance. He believes that the key to the smooth progress of China-Japan cooperation in the third-party market lies in the improvement of bilateral relations and the basis of stable political mutual trust.

In the interactive discussion, for questions from Zhao Siyu and Song Siqi graduate, Professor Shozaburo Sakai, Wang Jian and Huang Dong respectively stressed the importance of Japan supporting China's application to join the CPTPP Agreement, the importance of the promotion of Asia-Pacific integration, the role of China and Japan as major powers in tackling climate change.

Wei Jingfu, Director of Institute for China Neighboring Economies, said in the final summary, the experts and scholars provide complementary new idea for China and Japan’s third party market cooperation in southeast Asian, the severe challenge of COVID-19 is also the best opportunity for mutual benefit and win-win cooperation, as long as the governments and industry grasp this opportunity well, fully tap their own potential, will be of great benefit to realize the economic development in China and also Asia-Pacific region.

Nearly 30 guests, including Sugiyama Tatsuo, Regional General Manager of  NIPPON EXPRESS in East Asia Region, Chaiman of NIPPON EXPRESS (CHINA) CO., LTD., and Ms.Ma Xiaoting, Director of the International Affairs of Shanghai University of Science and Technology, attended the offline meeting at the German Exchange Center of the International Cultural Park of our university. 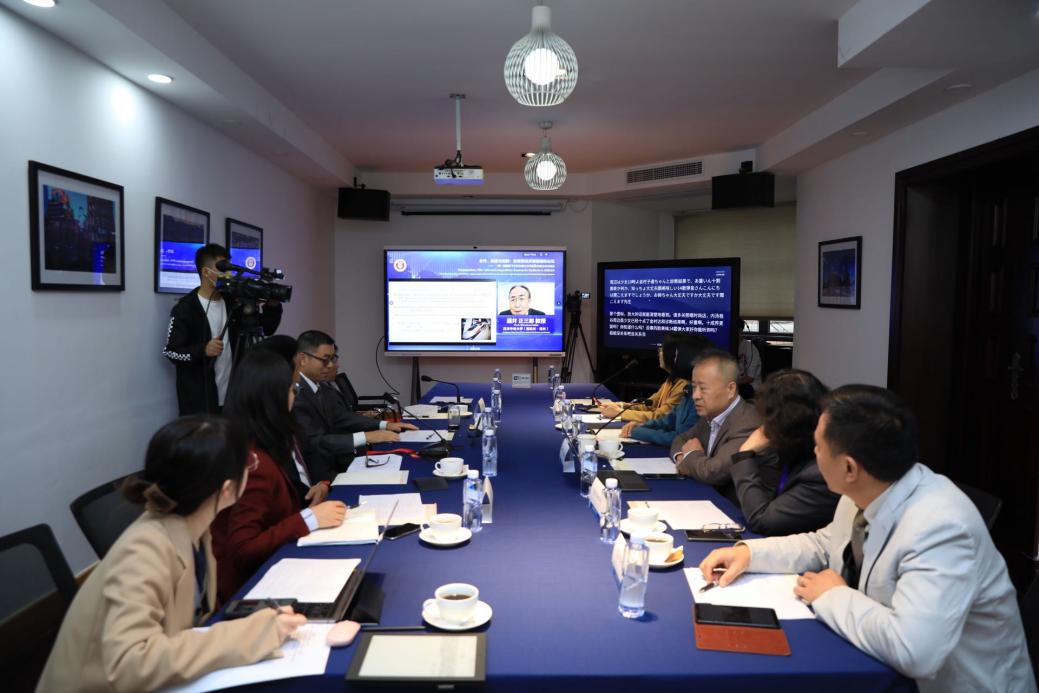