Professor Lu Le, dean of the School of Foreign Languages, first introduced the overall situations of visiting the University of Wakayama, Japan, Kyoto University of Foreign Studies and the Language Education College of DaHe. Professor Du Qin explained detailed cooperation situation with these universities and colleges. Director of International Affairs Office Prof. Wu Fengyu carefully listened to the report, and gave a positive evaluation to the School of Foreign Languages on the trip of Sino-Japanese friendly exchanges and proposed some suggestions to the department of Japanese and the Japanese cultural exchange center about the cooperation with Japanese universities especially the arrangements of curriculum, the summer school and management system. Both had a discussion about the plan to hold the 26th Japanese Speech Contest for Shanghai University Student in March 2013 in USST.

Dean Mrs. Lu Le and Director Mr. Wu Fengyu then signed the contract of establishing the Interpretation and Translation Training Base between College of Foreign Languages and International Affairs Office.

After the signing ceremony, representatives of the two sides took a photograph together. The establishment of the Interpretation and Translation Training Base provides a strong support in training market-oriented, high-level qualified talents in translation and interpretation and also helped in promoting international communications of the university. Both sides will work actively and pragmatically in building a better training base and strengthen supervisions in aspects of systems, personnel and ways of cooperation. And both parties will work jointly to promote the personnel training and to write a new chapter of cooperation . 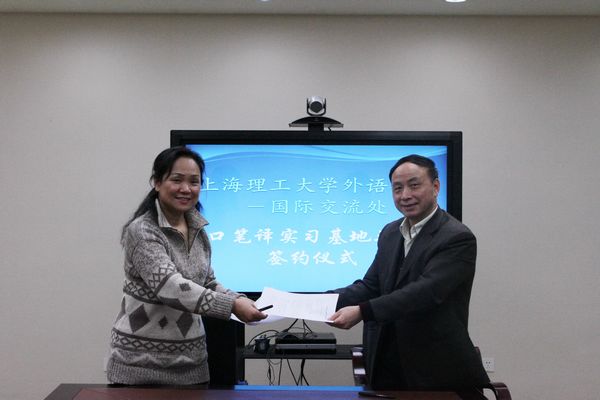